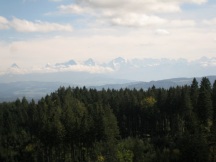 Swiss Alps in the distance 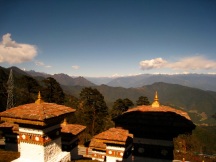 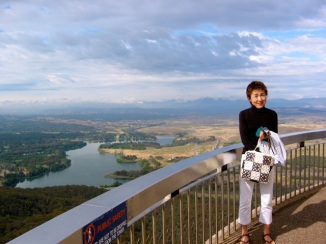 Thanks to Ailsa of Where’s My Backpack I have been searching through my mountain photos. We have visited mountains overseas, in Nepal, where the Himalayas almost encircle Kathmandu, and creep right up to Pokara, in Bhutan which is built amongst the Himalayan foothills, in Ireland where as usual we always search out the wildest places, in southern France with the Pyrenees, and in Switzerland where even a distant view of the Alps is breath-taking. Included here are mountains of Australia, an ancient land whose peaks have been wearing away for a very long time. Mount Warning is the centre of an old shield volcano, near the Border Ranges of NSW and Queensland. The Brindabellas, a small mountain range just south west of our nation’s capitol, Canberra, are often snow capped in winter, making a pretty sight from the city. Mount Sondor is part of the West MacDonnell Ranges in Central Australia, a mountain made famous by iconic aboriginal artist Albert Namatjira.